In just a few days, many of us will gather with our families around a table brimming with turkey and all the trimmings to reflect upon all that we are thankful for—from another year of health and happiness to the football game we’ll watch over our second slice of pumpkin pie.

Unfortunately, during this holiday that traditionally celebrated a bountiful harvest, many of us will remain unaware that conditions for this nation’s farmworkers have changed little since, nearly 50 years ago, renowned journalist Edward R. Murrow’s “Harvest of Shame” reported on the dismal conditions faced by migrant workers.

Several months ago we wrote about the exploitation faced each day by Florida’s farmworkers. Tomato pickers in the state haven’t received a raise since 1978, receive no overtime pay, sick days, or benefits of any kind, and have no right to organize in order to change these conditions. In the most extreme conditions, workers are forced to work against their will in situations of modern-day slavery. 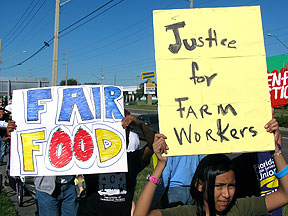 At the same time, we also wrote about a beacon of hope in the fields: the Coalition of Immokalee Workers (CIW), a membership-led farmworker organization that has been working since 1993 to improve wages and working conditions for Florida farmworkers. At that time, in response to the CIW’s Campaign for Fair Food, five food industry leaders (McDonald’s, Burger King, Subway, Taco Bell’s parent company Yum Brands and Whole Foods) had entered into agreements with the CIW in which they agreed to the three principles of the Campaign for Fair Food: to pay one more penny per pound for its tomatoes directly to the workers that picked them; to establish a code of conduct in their supply chain to ensure that workers were being treated with dignity; and to enter into a dialogue together with workers and growers to guarantee a voice and a place at the table for farmworkers.

In the time since—as a direct result of the Student/Farmworker Alliance’s Dine with Dignity campaign—food service providers Bon Appétit and Compass Group have also come to the table and committed to work with the CIW.

These agreements are proof that the days of the harvest of shame are numbered, but more work must be done to ensure that we continue along the path towards justice and dignity and create real systemic change in Florida’s agricultural industry. It is now time for supermarkets Publix, Stop & Shop, Giant, Ralph’s, Kroger and other Kroger-owned grocery chains, as well as food service providers Aramark and Sodexo to address the sub-poverty wages and human rights abuses faced by farmworkers picking their tomatoes. 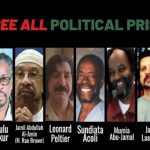