HondurasResists: How is the resistance doing?

Betty Vasquez: Here in the west we are now at 75 days of resistance. We march in all of the cities of the country. We demand the return of the constitutional order with the arrival of Manuel Zelaya. At 75 days nobody is surrendering. Even more the political campaigns are very low since 80% of the citizens are in resistance and asking for a national constitutional assembly

and the big political parties are weakening.

The economic crisis is strong, a lot of people can’t go anymore to the resistance because they lack resources to move. From here we have done awareness campaigns but the electricity costs are high and they have cut off many spaces to finance the campaigns, give food at the end of a march. It’s hard there is no tourism and the artisans aren’t selling their products, there are no exports because of the blockade and employment is down.

But nonetheless the mobilizations continue throughout the country?

BV: The resistance hasn’t had recesses in 75 days now. It hasn’t stopped. Some days like weekends or others we do assemblies, forums, debates, conferences and the resistance actions are in the whole country not just in Tegucigalpa the capital nor San Pedro Sula the industrial city it is in all of the towns some of which have 10,000 inhabitants or less.

HR: And how has the repression been?

BV: It gets stronger every day. The police and the army have united to beat us, violate women and even kill protesters. In each protest there are is ton of military repressing and now they infiltrate sports activities, in the stadiums, etc. Those they treat the worst are the peasants and the young students. They have gone into the high schools and universities to hit teachers and students and those from human rights from the State are in favor of the coup and the military so that raises the level of repression of the

HR: What is the current focus of the resistance?

HR: And what is the position of the resistance with respect to the elections?

Anti Pro-Choice reform passed in the state of Oaxaca 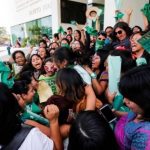