Civil society organizations and UN General Assembly President Miguel D’Escoto have warned of a possible coup attempt by the Honduran military. D’Escoto’s spokesperson said that the Assembly President “clearly and strongly condemns the attempted coup d’etat that is currently unfolding against the democratically elected Government of President Manuel Zelaya of Honduras.” Fears of a coup stem from a military deployment around the Presidential Palace and the Toncontín airport on Thursday.

The military and President Zelaya have been at odds over the President’s initiative to hold a popular consultation on June 28 to decide if November’s presidential elections should include a referendum where citizens would vote on whether or not Honduras should write a new constitution.

Mexico’s El Financiero claims that President Zelaya’s problems stem from his decision to join the Bolivarian Alternative for the Americas, Venezuelan President Hugo Chavez’s alternative to the US-supported Free Trade Area of the Americas.

However, Venezuela’s TeleSUR reports that Honduras’ current problems stem from that country’s free trade agreement with the United States:

Carlos Reyes, an independent Honduran presidential candidate, reported on Thursday that s ince 2005, when the Free Trade Agreement (FTA) with the United States was approved, popular movements “said that that was the final blow to the Constitution, and therefore a new Constitutional Assembly was necessary.”

For that reason, President Manuel Zelaya has taken up the cause and has rallied Hondurans around the necessity of holding a referendum during the upcoming elections, explained Reyes in a telephone interview with TeleSUR.

“This has unleashed the wrath of powerful groups, of the dominant classes that have been waging a terrible campaign.  Yesterday they were even talking about a coup,” he noted.

Honduras’ Supreme Court ruled the June 28 consultation illegal.  Following the Supreme Court’s decision, Honduras’ Congress unanimously voted to ask the Organization of American States (OAS) to withdraw the three observers it had sent to observe the consultation.  Congress argued that the OAS observers’ presence legitimated a process that had been declared illegal by the Supreme Court.

High-ranking military officials have refused to distribute the ballot boxes and the rest of the materials necessary for carrying out the consultation.

In retaliation, Zelaya fired the head of the military’s Joint Chiefs of Staff, Gen. Romeo Vásquez, and accepted the resignation of Minister of Defense Edmundo Orellana.

Likewise, the commanders of the other branches of the Armed Forces, Military, Navy, and Air Force, quit in solidarity.

La Tribuna reported that the military deployment around the Presidential Palace and the airport immediately followed the firing and resignations. 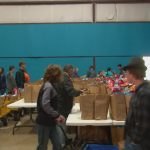