Whereas history cannot be silenced. Whereas our memory of horror is still present. Whereas the great majority do not know that everything is possible. Whereas we must restore in our collective memory those things that, if forgotten, will return. Whereas we must oppose the inertia of consensus–of erase and start over, tabula rasa, and don`t get involved–which is the dominant discourse that would like to bury the past forever. As victims, social activists, intellectuals, lawyers, families, humanitarian groups of yesterday and today, from the varied regions of Our America, we want to gather together in an intergenerational dialogue that at the same time denounces, informs, and analyzes the present reality and serves to create new preventative and protective tools to confront the increase in violence and impunity by those governing.

Today as yesterday, in many latitudes of Our America, we see the reappearance of many deeds of the recent past–a glimpse at the initial gestures of totalitarian power that define the enemy as Jew, subversive, poor, foreigner, immigrant, and used synonymously with terrorist. This is done to impose a single truth in the logic of the established order that through routine practices and the strategies of power, with facades and judicial limbos, they “legalize” impunity using national borders, clandestine jails, systematic torture (including sexual), summary disappearances and all the horrors they produce.

We think that silence is an ally and accomplice to terror. That speaking out gives rise to clearing up. That resistance to being aware, both individual and collective, and the revulsion and fear that the jails, torture, disappearances awakens in us, is an invitation to flee from these themes. Through the testimony of victims, exposing the truth, and the recovery of historical memory, we want to understand what happened and how it happened because to document, organize, and share this will permit us to know what is happening today. When the hegemonic power, in complicity with some national states, makes a de facto reconfiguration of the geopolitical map of our hemisphere to serve multi-national companies, with their mega-projects, as a renewed form of territorial acquisition and the looting of our natural resources, they do this in the name of counter-insurgency with new military bases, the return of the U.S. Navy Fourth Fleet, mercenaries operating as private contractors, paramilitaries, fumigations, Sucumbios, and the terrorism of the media.

We think that by knowing the origin and the nature of pain, and the mechanisms of State terrorism with its discourse of power that justifies atrocities, perhaps implies disarming today, in a preventative manner, it`s validity and efficiency. Confronted with a situation of renewed terror, what the system proposes is to flee because of disgust and fear. To not take flight demands vigilance and constant awareness. Silence and forgetfulness, along with indifference and impunity favor the persistence and reproduction of violence and State terrorism. We do this not in a vindictive spirit, but for prevention, in the spirit of those that we cannot and do not want to forget.

With this in mind, and hearing the clamor for justice by the people of our hemisphere, we convoke the First Inter-American Gathering Against Impunity that will take place on june 20-21, 2009. 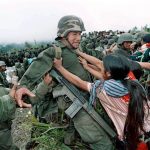 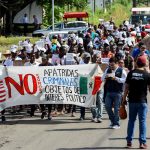