To the Inter-American Human Rights Commission

To all Social and Political Organizations

To all Human Rights defenders

To all the people of Mexico and the World

To the National and International press

To the Other Campaign

In response to reports that have been spread by some media outlets that the Supreme Court is about to make a ruling that would allow the freedom of 40 of the paramilitaries responsible for the massacre in Acteal on December 22, 1997, we want to state the following:

We are the members of Las Abejas Civil Society, from the San Pedro Chenalhó municipality, Chiapas, and based in the Sacred Land of Acteal in the same municipality.

Our organization formed in 1992 to confront the repression that then-governor of Chiapas, Patrocinio González Garrido, launched against indigenous communities, among them our own community of Chenalhó that saw several of their founding members, among them the current President of the Board of Directors of Las Abejas, unjustly imprisoned for crimes they didn’t commit. 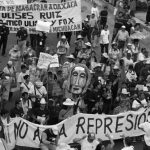 JUSTICE FOR OAXACA!! PUNISHMENT FOR THE KILLERS OF LORENZO SAMPABLO CERVANTES!!

The Obama Style and Latin America